When grappling with the enormity of IoT platforms, a sort of herd mentality has emerged, leading scores of vendors to create unique IoT platforms. But the problem is, no single IoT platform can accommodate all potential enterprise and industrial IoT use cases, according to Jason Shepherd, former chair of the EdgeX Foundry governing board. So organizations can become overwhelmed by the complexity of platform integration on the one hand or creating a platform from scratch on the other, Shepherd said. “I liken it to a riptide current. Your natural inclination is to swim into the current, but you risk drowning if you do that,” added Shepherd, who is the IoT and edge chief technology officer at Dell Technologies. “What you’re supposed to do, which is not intuitive, is to swim sideways.”

The EdgeX Foundry was created to sidestep the IoT platform battles. “While most people were trying to create their own platforms, we went open,” Shepherd said. “We swam sideways. And that’s what’s actually going to win.”

The EdgeX Foundry recently announced growing momentum with its latest release, known as “Edinburgh.” The product of a global ecosystem, Edinburgh is the latest example of the EdgeX Foundry’s open source microservices framework. The approach enables users to plug and play components from a growing number of third-party offerings.

In other LF Edge–related news, LF Edge’s Akraino Edge Stack initiative launched its first release in June to establish a framework for the 5G and IoT edge application ecosystem. Known as Akraino R1, it brings together several edge disciplines and offers deployment-ready blueprints.

Kandan Kathirvel, a director at AT&T and Akraino technical steering committee chair, invokes the early days of cloud computing to explain the mission behind the initiative. “In cloud computing, one of the pain points many users had when deploying the cloud was integrating multiple open source projects together,” Kathirvel said. “A user might need to work with hundreds of different open source communities.” And after deploying a cloud project, sometimes gaps were evident. Many organizations found themselves individually in this situation without realizing other users were essentially doing the same. “And this situation increases the cost and deployment time.”

It is great to see things mature–whether kids or adults or technologies. Or an open source project called EdgeX Foundry. Yesterday I had the pleasure of two exciting teleconferences regarding the latest release of EdgeX Foundry, named Edinburgh, from the Linux Foundation’s LF Edge organization. I’ve had many conversations with Jason Shepherd, LF Edge Board Member and Dell Technologies IoT and Edge Computing CTO, over the past three years. When we finally got a chance to catch up yesterday afternoon, he could not have concealed his excitement had he tried.

I have written about EdgeXFoundry here from Hannover 2017, again in 2018, and when incorporated in Linux Foundation’s LF Edge umbrella. This IoT platform is more than a platform. During my Hannover visits of 2017 and 2018 it seemed that all God’s children need to develop their own IoT platform. Of course, when a company develops a platform the goal is to connect as many apps as possible to its main application.

Read more of Gary’s article in the Manufacturing Connection.

As the IoT and Industrial IoT grows, so grows EdgeX Foundry, an open IoT project of The Linux Foundation, which was established several years ago, and became part of the LF Edge umbrella, including Akraino Edge Stack, Edge Virtualization Engine, Open Glossary of Edge Computing and Home Edge.

The umbrella organization, led by Arpit Joshipura, general manager, Networking, Edge and IoT, the Linux Foundation, is working with its members, and with other open technology non-profit organizations to build and support an industry framework for IoT and edge-related applications.

This includes the Industrial Internet Consortium (IIC), which announced earlier this year a liaison to work together to advance their shared interests, working “together to align efforts to maximize interoperability, portability, security and privacy for the industrial Internet,” jointly identifying and sharing practices, collaborating on test beds and experimental projects, working towards interoperability by harmonizing architecture and other elements and collaborating on common elements.

The internet of things gets a lot of flak for its fragmentation, but attempts are being made to rectify the situation. Case in point: The EdgeX Foundry on Thursday announced the availability of its Edinburgh release, created for IoT use cases across vertical markets.

It’s not going to completely eliminate fragmentation—that would be an impractical challenge to mount. But whereas a few years ago everybody was trying to do edge and IoT implementations in a proprietary manner, “I would say open source is ready for prime time from an edge perspective,” said Arpit Joshipura, general manager, Networking, Edge and IoT with the Linux Foundation, in an interview.

EdgeX Foundry is a project under the LF Edge umbrella organization within the Linux Foundation. It’s where the Edinburgh release was created as an enabler for IoT use cases, although the EdgeX movement actually started with a small team at Dell before it contributed the code to the Linux Foundation.

EdgeX Foundry, an open source interoperable framework for edge IoT computing, is all set to make “live” its 1st version of product, ‘Edinburg’. This comes after four iterations of code development. It has been built with the aim of having consistency and inter-operability in projects, standards groups, and industry alliances across the Internet of Things (IoT) spectrum.

Calling it a milestone, the company said in its official blog that the release of EdgeX Foundry Edinburgh (Version 1.0) represented “a significant milestone” in EdgeX development.

Read more of the Internet of All Things article here.

“We’re calling it an anchor release for commercial adoption across IoT use cases,” said Arpit Joshipura, general manager for Networking, Edge, and IoT at the Linux Foundation. At this point in the platform’s lifecycle, EdgeX community members have created a range of complementary products and services to support commercial deployments, he explained. This includes training and customer pilot programs, and plug-in enhancements for device connectivity, applications, data and system management, and security.

The New Stack: How the Linux Foundation’s EVE Can Replace Windows, Linux for Edge Computing

Whether or not Edge computing serves as the backbone of mission-critical business worldwide depends on the success of the underlying network.

Recognizing the Edge’s potential and urgency to support Edge network, The Linux Foundation earlier this year created LF Edge, an umbrella organization dedicated to creating an open, agnostic and interoperable framework for edge computing. Similar to what the Cloud Native Computing Foundation (CNCF) has done for cloud development, LF Edge aims to enhance cooperation among key players so that the industry as a whole can advance more quickly.

By 2021, Gartner forecasts that there will be approximately 25 billion IoT devices in use around the world. Each of those devices, in turn, has the capacity to produce immense volumes of valuable data. Much of this data could be used to improve business-critical operations — but only if we’re able to analyze it in a timely and efficient manner. As mentioned above, it’s this combination of factors that has led to the rise of edge computing as one of the most rapidly -developing technology spaces today.

This idea of interoperability at the edge is particularly important because the hardware that makes up edge devices is so diverse — much more so than servers in a data center. Yet for edge computing to succeed, we need to be able to run applications right on local gateway devices to analyze and respond to IoT and Industry 4.0 data in near-real time. How do you design applications that are compatible with a huge variety of hardware and capable of running without a reliable cloud connection? This is the challenge that LF Edge is helping to solve.

Part of the solution is Project EVE, an Edge Virtualization Engine donated to LF Edge by ZEDEDA last month. I think of EVE as doing for the edge what Android did for mobile phones and what VMware did for data centers: decoupling software from hardware to make application development and deployment easier.

By LF EdgeAkraino, In the News

Forget the expanding universe, for telcos it is all about the ever-expanding network edge, which just got a little bit bigger yesterday with the news that the Akraino open source project has published its first software release. Although it was only launched in February 2018, Akraino had a rich pedigree with seed code from AT&T and has enjoyed plenty of support during its short time under the Linux Foundation’s LF Edge umbrella.

Akraino Edge Stack, to give the project its full name, is focused on creating an open source software stack that supports a high-availability cloud stack optimised for edge computing systems and applications. It is being designed to improve the state of edge cloud infrastructure for enterprise edge, OTT edge, as well as telecoms edge networks. The project promises to give users new levels of flexibility to scale their edge cloud services quickly, to maximise the applications and functions supported at the edge, and to help ensure the reliability of critical systems.

“Akraino Release 1 represents the first milestone towards creation of a much-needed common framework for edge solutions that address a diverse set of edge use cases,” said Arpit Joshipura, general manager, Networking, Automation, Edge and IoT, the Linux Foundation. “With the support of experts from all across the industry, we are paving the way to enable and support future technology at the edge.”

By Maemalynn MeanorAkraino, EdgeX Foundry, In the News, Project EVE

By Maemalynn MeanorAkraino, In the News

LF Edge is part of the Linux Foundation. 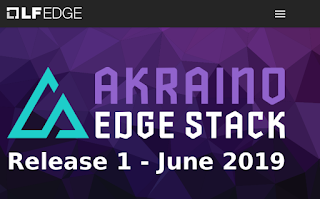 “Akraino R1 represents the first milestone towards creation of a much-needed common framework for edge solutions that address a diverse set of edge use cases,” said Arpit Joshipura, general manager, Networking, Automation, Edge and IoT, the Linux Foundation. “With the support of experts from all across the industry, we are paving the way to enable and support future technology at the edge.”

Akraino is currently comprised of 11+ blueprint families with 19+ specific blueprints under development to support a variety of edge use cases.