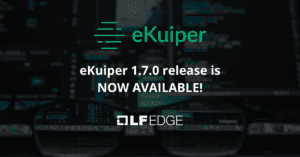 eKuiper 1.7.0 continues to improve the expressiveness of the rules by providing the lookup table, updatable sink, and more SQL syntax and functions. The 1.7.0 release adds a number of significant new features, among them are

Learn more about these and other features of eKuiper’s 1.7.0 release in the release notes.

In the next release, the community will work on enhancing graph API to support more nodes, such as switch node and script node, to provide a more powerful and easy-to-use rule pipeline composing tool. A new function to run tensor flow lite model will be provided to easily integrate with AI models. Check out the evolving Github 1.8.0 milestones and we welcome you to add your wisdom.