By Sunny CaiNovember 4, 2022No Comments

The Internet of Things (IoT) market has expanded significantly in recent years. According to Gartner, more than 50% of enterprise-managed data will be created and processed outside the data center or cloud by 2025. As edge computing becomes a significant revenue opportunity for the technology and telecom industries, it’s even more important to have effective leaders to help advance the future of edge computing.

Today we sat down with Daniel Lazaro, LF Edge Technical Advisory Council (TAC) vice-chair and Senior Technical Program Manager at AVEVA. Daniel tells us how he got involved in the edge computing industry, the LF Edge project umbrella, and why leaders must plan for the growth of IoT and edge. 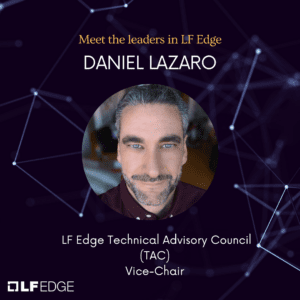 How did you get involved in the LF Edge community and what is your role now?

In January 2019, OSIsoft, which was my employer at the time, joined LF Edge. My first official community role was with the LF Edge Technical Advisory Council (TAC) where I became the TAC representative for project Fledge, with the goal to drive community growth. As part of the TAC, we developed the LF Edge project lifecycle process and took in Fledge as a “Stage 1” project;” Fledge was actually the first project to go through the various maturity stages within LF Edge, beginning at project inception (Fledge is now “Stage 2” and in the process of becoming a “Stage 3” or “mature” project).

Later, I joined the Board and the Strategic Planning Committee to help drive the direction and growth of LF Edge as a whole. I have participated in various other efforts including SIGs, LF Edge lab, and the Outreach Committee to name a few. I was recently honored to be elected as TAC vice-chair and I look forward to collaborating even more across  the LF Edge ecosystem.

What is your vision for the edge computing industry?

I believe edge computing is now at the point where the cloud was a decade ago: It is about to explode. Several forecasts estimate the size of the edge computing market to reach 156 billion by 2030. Gardner predicts that ”By 2025, more than 50% of enterprise-managed data will be created and processed outside the data center or cloud.” The time to catch the edge wave is now.

What impact do you see open source playing in the evolution of the edge market? And how has it shaped where we are today?

Open source is a platform for innovation, and as such, is helping to accelerate the development of edge solutions. Open source has enabled end users, developers and organizations to build communities that collaborate on projects that address current and future needs. Beyond LF Edge, I am also a voting member of FledgePOWER’s TAC, under LF Energy, a sister project and community that focuses on power built on top of Fledge. OSDU is another example of a community built around open source for the oil & gas vertical, also leveraging Fledge.

Why is LF Edge important to advance the future of edge computing?

LF Edge promotes sustainable ecosystems and communities of peers that fosters cross-industry collaboration, enables organizations to speed up adoption and delivers value to end users. LF edge is a neutral home for code and collaboration built on trust that focuses on edge computing projects.

What is AVEVA’s role in edge computing and LF Edge?

AVEVA, a leader in industrial software, is helping to drive the growth of the Fledge technology that was initially contributed by fellow collaborators and member organization Dianomic. AVEVA is also currently working on a reseller agreement with Dianomic with Fledge at its core.

The AVEVA Edge solution offers SCADA, HMI and IoT Edge solutions for OEMs, System Integrators, and end users with a focus on interoperability, mobility, and portability that runs on Linux. The PI Edge technology collects real-time data from remote assets and IIoT devices for intelligence that spans the entire operation.

What advice do you give to organizations who want to get involved in the LF Edge community?

Participate and contribute. Contributions come in many different shapes. Network with your peers, lead by example and let your voice be heard. At LF Edge, you will find a community ready to support and mentor you in your journey. Come join us!