In the PCEI R4 blog we described the initial implementation of the blueprint. This blog focuses on new features and capabilities implemented in the PCEI in Akraino Release 5. Before discussing the specifics of the implementation, it is useful to go over the motivation for PCEI. Among the main drivers behind PCEI are the following:

Public Cloud Edge Interface (PCEI) is a set of open APIs, orchestration functionalities and edge capabilities for enabling Multi-Domain Interworking across the Operator Network Edge, the Public Cloud Core and Edge, the 3rd-Party Edge as well as the underlying infrastructure such as Data Centers, Compute Hardware and Networks. 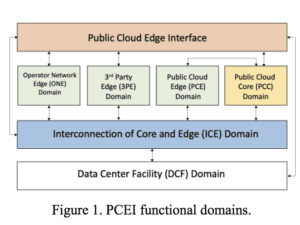 One of the biggest challenges with multi-domain infrastructure orchestration is finding a common and uniform method of describing the required resources and parameters in different domains, especially in public clouds (PCC). Every public cloud provides a range of service categories with a variety of different services, with each service having several different components, and each component having multiple features, with different parameters.

Terraform emerged as a common Infrastructure-as-Code tool that allows to abstract diverse provisioning methods (API, CLI, etc.) used in the individual domains and provision infrastructure components using a high-level language, if a Terraform Provider is available for the domain.

The notable innovation in PCEI R5 is the integration of Terraform as a microservice within the PCEI orchestrator (CDS, see below). This allows for important orchestration properties: 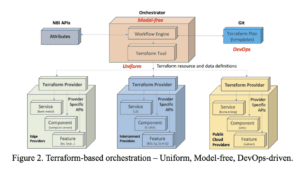 Examples of Terraform plans are shown below. 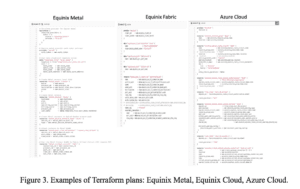 The PCEI blueprint makes use of the following open-source technologies and tools:

Functional Roles and Components in the PCEI R5 Architecture 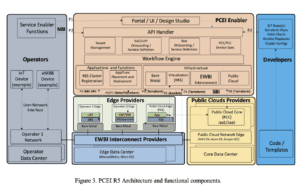 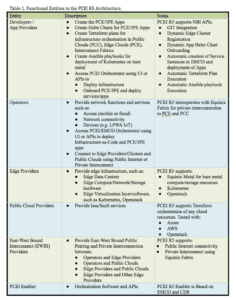 In PCEI R5 we demonstrated the use of PCEI Enabler based on EMCO/CDS with integrated programmatic Terraform executor to orchestrate infrastructure across multiple domains and deploy an edge application. The DevOps driven Multi-domain Infrastructure Orchestration demo consisted of the following:

The video recording of the PCEI R5 presentation and demonstration can be found at this link.

For more information on PCEI R5: