The Public Cloud Interface (PCEI) blueprint was introduced in our last blog. This blog describes the initial implementation of PCEI in Akraino Release 4. In summary, PCEI R4 is implemented based on Edge Multi-Cluster Orchestrator (EMCO, a.k.a ONAP4K8S) and demonstrates

Before describing the specifics of the implementation, it is useful to revisit PCEI architectural concepts.

The purpose of Public Cloud Edge Interface (PCEI) is to implement a set of open APIs and orchestration functionalities for enabling Multi-Domain interworking across Mobile Edge, Public Cloud Core and Edge, the 3rd-Party Edge functions as well as the underlying infrastructure such as Data Centers, Compute Hardware and Networks. Interfaces between the functional domains are shown in the figure below: 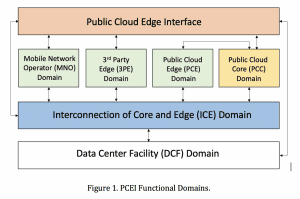 There are some important points to highlight regarding the relationships between the Public Cloud Core (PCC) and the Public Cloud Edge (PCE) domains. These relationships influence where the orchestration tasks apply and how the edge infrastructure is controlled. Both domains have some fundamental functions such as the underlying platform hardware, virtualization environment as well as the applications and services. In the Public Cloud context, we distinguish two main relationship types between the PCC and PCE functions: Coupled and Decoupled. The table below shows this classification and provides examples. 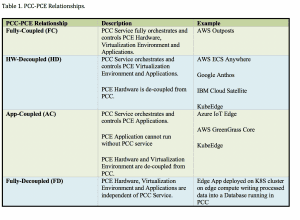 The PCC-PCE relationships also involve interactions such as Orchestration, Control and Data transactions, messaging and flows. As a general framework, we use the following definitions:

The figure below illustrates PCC-PCE relationships and interactions. Note that the label “O” designates Orchestration, “C” designates Control and “D” designates Data as defined above. 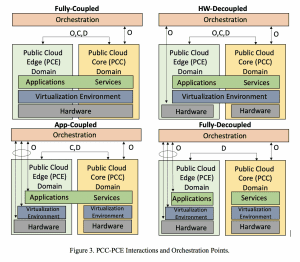 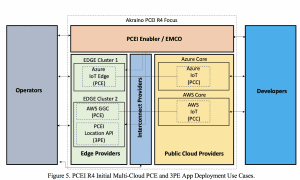 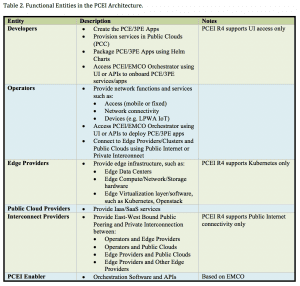 The below description shows an example of the end-to-end deployment and validation of operation for Azure IoT Edge. The PCEI R4 End-to-End Validation Guide provides examples for AWS GreenGrass Core and the ETSI MEC Location API App. 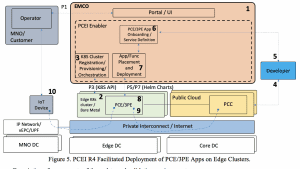 Description of components of the end-to-end validation environment:

The end-to-end PCEI validation steps are described below (the step numbering refers to Figure 5):

PCEI Release 5 will feature expanded capabilities and introduce new features as shown below: