By Maemalynn MeanorDecember 10, 2020No Comments 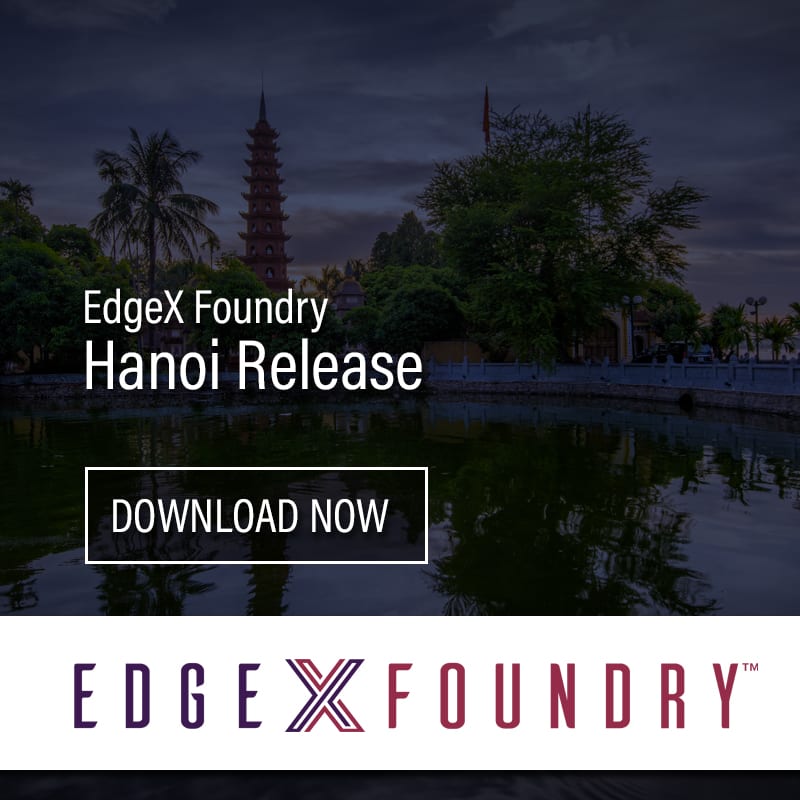 “EdgeX Foundry fosters an ecosystem of interoperable components from a variety of vendors to create a much-needed IoT framework for edge solutions,” said Arpit Joshipura, general manager, Networking, Automation, Edge and IoT, the Linux Foundation. “With the support of LF Edge members and EdgeX contributors from across the globe, we are paving the way to enable and support a more robust solution at the IoT, Enterprise, Cloud and Telco edge.”

Launched in April 2017, and now part of the LF Edge umbrella, EdgeX Foundry is an open source, loosely-coupled microservices framework that provides the choice to plug and play from a growing ecosystem of available third-party offerings or to augment proprietary innovations. With a focus on the IoT Edge, EdgeX simplifies the process to design, develop and deploy solutions across industrial, enterprise, and consumer applications.

EdgeX Foundry’s Hanoi release is the seventh consecutive semi-annual release and has a number of features including simplified deployment, improved performance and scalability testing and launch of Command Line Interface (CLI). Hanoi also incorporates the first collection of new, platform-wide micro service APIs that allows adopters to get a feel for what’s coming with EdgeX 2.0 in the spring.

EdgeX Foundry has a history of working closely with other LF Edge projects including Akraino, Home Edge, EVE and Open Horizon. With the Hanoi release, EdgeX has provided a sample service to export data from EdgeX to Fledge, an industrial IoT framework that focuses on critical operations, predictive maintenance, situational awareness and safety.  This allows EdgeX device connectors and capabilities to be used with Fledge instances. Conversely, with its next release, Fledge intends to provide a device service to allow Fledge instances to feed EdgeX instances.

To learn more about the Hanoi release, check out this blog post.

The next step for EdgeX Foundry is the “Ireland” release, tentatively scheduled for spring 2021. Ireland will include a number of significant changes, including; EdgeX’s new V2 API set and V2 API testing;  additional security improvements;  and easier transition/communication between device services to message application services directly (allowing for better quality of service when needed and bypassing persistence when not needed).

The new EdgeX Foundry website features a variety of resources that will help new developers get started, learn about new commercial offerings from LF Edge members and see the framework in action in real-world use cases across Artificial Intelligence (AI), Industrial IoT (IIoT), Manufacturing, and Retail. The recently launched Adopter Series showcases companies that already deploy the EdgeX framework in products and solutions including Accenture, HP, Intel, Jiangxing Intelligence, ThunderSoft and TIBCO.

Additionally, Canonical, an LF Edge member and long-time EdgeX Foundry contributor, has taken over the management of the EdgeX Snap Store. Since the Dehli release, the community has published EdgeX snap packages for desktop, cloud and IoT that are easy to install, secure, cross‐platform and dependency‐free.

“With this release, we are committing to the maintenance and publishing of the official EdgeX snaps in the Canonical Snap Store,” said Tony Espy, Canonical’s EdgeX  Engineering Manager. “Taking over management of the EdgeX snap is an important step toward providing developers with a safe and secure path forward for their customers.”

For more information about LF Edge and its projects, visit https://www.lfedge.org/

About the Linux Foundation