I hope you and yours are doing well in these crazy times. Things are going great within the LF Edge community as we increase alignment across projects, fine-tune our processes and recently welcomed two new projects: Open Horizon and Secure Device Onboard. Net-net, more and more people by the day are joining in to grow an inclusive, structured community focused on developing an open framework for edge computing.

As a board member who is also involved in a number of the LF Edge working groups, I wanted to take this opportunity to provide an update on several fronts: the recently released LF Edge taxonomy white paper, the emerging Special Interest Groups (SIGs), and Project EVE.

Released last week, the community-created white paper outlining the LF Edge taxonomy and framework is an important piece that we believe will really help clear up a lot of market confusion by providing a balanced view of the edge landscape that is based on inherent technical and logistical trade offs spanning the edge to cloud continuum. This is compared to many existing edge taxonomies that break down the continuum using ambiguous terms that can be interpreted in different ways. 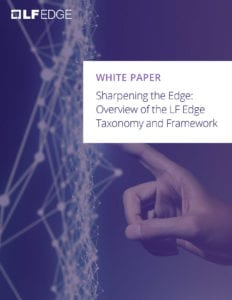 The goal was to provide a universal framework for various industries to apply their preferred terminology on top of. We’ve received universally positive feedback in previews with key analysts and encourage you to check out both the paper and this related webinar that presents key insights.

With nine projects and the new taxonomy serving as a solid foundation, we’re now increasing focus on spinning up Vertical Solutions Focus Groups within the LF Edge community. These focus groups are a precedent set by CNCF and other Linux Foundation projects. The purpose is to document unique requirements for specific markets and feed desired features back into the LF Edge project working groups for consideration as part of their roadmaps. Doing this across as many use cases spanning Industrial, Enterprise and Consumer markets will ensure that each project is maximizing impact while also recognizing inherent tradeoffs.

Both member and non-member companies will be welcome to volunteer to lead a vertical, or join one already in flight. It’s a low time commitment and a great way to demonstrate thought leadership as an end user while making sure LF Edge projects are developing the right features and specific extensions for the verticals and use cases that matter the most to your company. Stay tuned for more details, including a virtual launch event in the late summer!

LF Edge projects are growing across the board and Project EVE is no exception. The EVE community is now approaching 50 unique contributors from organizations including ZEDEDA, Xilinx, Intel, Global Logic, Atomic, GE Research and Timesys and contributions are also growing at a steady pace.

In terms of market focus, EVE is optimized for supporting IoT edge computing workloads at the “Smart Device Edge,” as defined in LF Edge taxonomy.  Edge compute nodes in this subcategory are characterized by two attributes: 1) being deployed outside of a physically-secure data center but 2) still having enough memory (approximately 256MB) to support application abstraction in the form of virtualization and/or containerization. 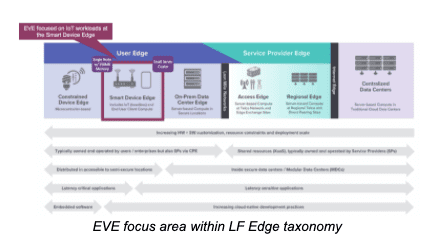 Devices at the IoT Edge are constrained, heterogeneous, and physically accessible, dictating that special attention needs to be made to optimize footprint, simplify support for diverse hardware, enable zero touch provisioning, and establish a zero trust security model that eliminates the guesswork in securing distributed edge computing nodes at scale. EVE builds on the principles of traditional virtualization tools optimized for the data center, but is optimized for the unique needs of the IoT Edge.

The chart below explains how EVE takes a balance of architectural approaches to serve as a holistic, open engine for supporting any IoT edge computing workload. The net is that the bare metal foundation enables deep security and networking capabilities, supports both containers and virtual machines to provide options for both modern and legacy workloads, and mitigates lock-in with its open API. 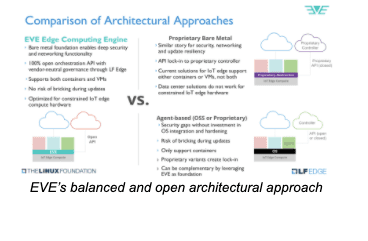 Since launching as a founding LF Edge project in early 2019, the EVE community has been working hard to modularize the EVE foundation so developers can choose preferred components, ultimately wrapped up into a de-facto standard interface in the form of the open EVE API.

As part of the community’s effort to increase modularity, support for ACRN and KVM hypervisors as alternatives to the original Xen baseline has been added. The project has adopted continerd given that it is the most common container runtime and a general tenet is to integrate leading OSS projects and standards wherever possible rather than reinventing.

The community’s goals for the balance of 2020 include further increasing modularity and reducing footprint, and adding support for Kubernetes via K3S. Regarding the latter, this will be done by integrating the right features from the Kubernetes paradigm rather than simply trying to cut and paste the same functionality from centralized data centers to the necessarily different IoT edge. Join in if you’d like to help the community shape this important bridge from the IoT Edge to the data center paradigm!

In terms of adoption, EVE is being leveraged as the edge computing foundation for deployments in several market verticals including oil and gas, renewable energy, manufacturing and healthcare. Check out the EVE in Market page for a growing list of community-supported images for hardware models from Advantech, Dell, HPE, IEI, Intel, Kontron, Lanner, Nexcomm, Raspberry Pi, Siemens, Supermicro and more! This page also has links to the OSS Adam and commercial controller offers that leverage the open EVE API.

Finally, thanks to the great work of Stefano Stabelini at Xylinx, among others, an image is now available for the Raspberry Pi 4 to make it even easier and cost-effective to get started with EVE! This image includes GPU support and can be used with the OSS Adam controller today. Stay tuned to “EVE in the Market” page for other controller options, or contribute your own!

The mission of the EVE community is to do for the IoT Edge what Android did for the smartphone. Learn more about EVE through the project page on the LF Edge site and in this EVE webinar in which I also highlight the importance of an open edge for realizing the true business potential of digital transformation. We welcome you to join the community to make EVE the one foundational stack needed to scale IoT edge computing deployments with choice of hardware, applications and cloud!

In closing, we have a lot of great things going on within the LF Edge community and we’re just scratching the surface of the opportunity ahead. Our future is bright and we encourage you to get involved, whether it be providing key market input through a SIG or diving straight in and contributing code. After all, LF Edge is a technical meritocracy and the best way to vote on the direction of a project is with fingers on your keyboard!

Calling all innovators!! You’re invited to compete in the EdgeX Foundry Challenge Shanghai 2020

Calling all innovators!! You’re invited to compete in the EdgeX Foundry Challenge Shanghai 2020