The EdgeX Foundry China Project launched in December 2019 with an active community in China that leveraged as many resources provided by LF Edge and EdgeX Foundry global community at possible. We’re happy to report that the first quarter has been a success. 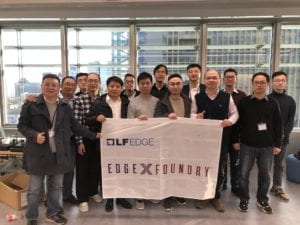 All of our content is curated on the China Project wiki site.  Three monthly meetings were conducted on Jan 10, Feb 14 and Mar 6, where core contributors from VMware, Intel, Thundersoft, CertusNet, EMQ, IoTech and other active companies discuss the project, activities and outreach.

One of our focuses is to raise awareness for EdgeX Foundry in China and encourage developers to get more familiar with the EdgeX framework, unblock obstacles and boost their interest to contribute to the innovation of the community. We planned a hackathon and hosted a tight series of weekly webinars to introduce EdgeX Foundry components and code level analysis. We hosted six sessions led by VMware, Thundersoft,  IoTech and Intel with more than 500 developers attending these sessions.

The first result of our Virtual Sandbox came out in Q1. EMQ published an OSS project Kuiper for rule engine in edge & IoT area in last winter, and they had a strong interest to contribute to EdgeX Foundry community. China Project built the connection of EMQ with the proper technical leaders in EdgeX Foundry global community, and hosted the initial round of technical discussion meetings. Right now it’s agreed to include Kuiper container in EdgeX Docker Compose file, targeting to have that integration for Geneva release in Apr 2020. EMQ has biweekly meetings setup with EdgeX App WG to ensure that happen. This is the second major contribution from China to EdgeX community after UI by VMware, which we recently also added more resources to upgrade in the Geneva release next month.

This quarter, we had Chinese Spring Festival break annually, and the recent coronavirus outburst also made a sudden and strong impact. While mostly working from home for better safety, members of China Project are still trying to make some progress to promote EdgeX Foundry. For examples,

As a common seen approach, we setup an official WeChat ID ”EdgeXFoundryCN” (“EdgeXFoundry社区” in Chinese), which will help us promote EdgeX Foundry as an independent communication channel. After just 10 days and three posts, the followers of this ID increased to around 150. We will leverage this WeChat ID as well as all existing EdgeX Foundry WeChat groups and Linux Foundation WeChat group, and other WeChat IDs operated by community members.

We understand that this is an extraordinary time, and we are adjusting to the rapidly evolving situation. In the meanwhile, we also try best to remain focused on supporting the community and delivering our commitments. Let’s work together and make it happen!