IoT, AI & Networking at the Edge

This blog originally ran on the State of the Edge website. 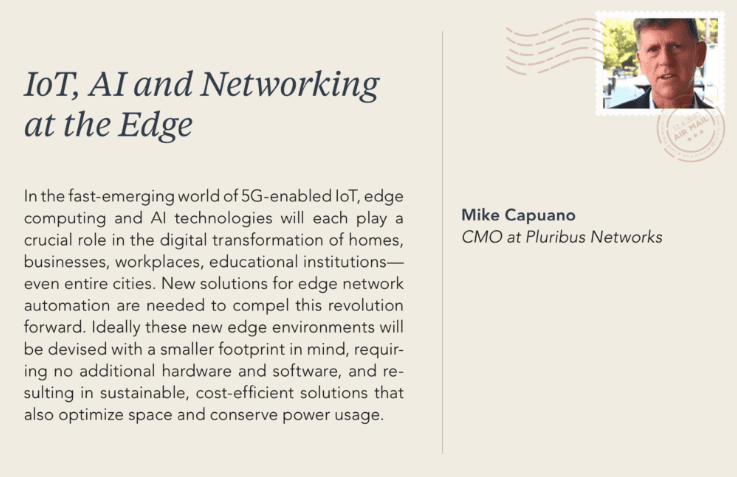 5G is the first upgrade to the cellular network that will be justified not only by higher speeds and new capabilities targeted at consumer applications such as low latency gaming but also  by its ability to support enterprise applications. The Internet of Things (IoT) will become the essential fuel for this revolution, as it transforms almost every business, government, and educational institution. By installing sensors, video cameras and other devices in buildings,  factories, stadiums and in other locations, such as in vehicles, enterprises can collect and act on data to make them more efficient and more competitive. This digital transformation will create a better and safer environment for employees and to deliver the best user experience possible to end customers. In this emerging world of 5G-enabled IoT, edge computing will play a critical role.

IoT will leverage public and private 5G, AI, and edge compute. In many cases, analysis of the IoT data will be highly complex, requiring the correlation of multiple data input streams fed into an AI inference model—often in real time. Use cases include factory automation and safety, energy production, smart cities, traffic management, large venue crowd management, and many more. Because the data streams will be large and will often require immediate decision-making, they will benefit from edge compute infrastructure that is in close proximity to the data in order to reduce latency and data transit costs, as well as ensure autonomy if the connection to a central data center is cut.

Owing to these requirements, AI stacks will be deployed in multiple edge locations, including on premises, in 5G base station aggregation sites, in telco central offices and at many more “edges”. We are rapidly moving from a centralized data center model to a highly distributed compute architecture. Developers will place workloads in edge locations where applications can deliver their services at the highest performance with the lowest cost.

Critical to all of this will be the networking that will connect all of these edge locations and their interrelated compute clusters. Network capabilities must now scale to a highly distributed model, providing automation capabilities that include Software Defined Networking (SDN) of both the physical and virtual networks.

To satisfy the requirements of a real-time, edge-driven IoT environment, we must innovate to deliver cost effective, simple, and unified software defined networking across both the physical and virtual networks that support the edge. The traditional model for SDN was not based on these requirements. It  was built for large hyperscale and enterprise data centers that rely on multiple servers and software licenses incurring costs and consuming space and power. This approach also requires complex integrations to deploy and orchestrate the physical underlay, the virtual overlay, along with storage and compute.

Deploying traditional SDN into edge environments is not an attractive solution. Often there will not be space to deploy multiple servers for management and SDN control of the physical and virtual networks. Furthermore, all the SDN controllers need to be orchestrated by a higher layer “controller of controllers” to synchronize network state, which adds unnecessary latency, cost and complexity.

In some cases, companies also deploy SmartNICs (a network interface controller that also performs networking functions to offload processing from the CPU). SmartNICS allow packet processing associated with network virtualization without burdening the primary compute (which is better utilized supporting other workloads). Also, hardware-based taps, probes and packet brokers are being deployed to support network telemtry and analytics.

Applying the network automation model we built for large centralized data centers will be expensive and cumbersome, as well as space and power inefficient, in edge environments. The industry needs to rethink the approach to edge network automation and deliver a solution designed from the ground up for distributed environments. Ideally this solution does not require additional hardware and software but can leverage the switches and compute that are already being deployed to resource constrained edge environments.

The good news is that a number of companies are developing new approaches that deliver highly distributed SDN control that unifies the physical underlay and virtual overlay along with providing network analytics — all with no additional external hardware or software. These new technologies can utilize, for example, the fairly powerful and underutilized CPU and memory in “white box” Top of Rack (TOR) switches to deliver SDN, network virtualization, network analytics and a DCGW (Data Center Gateway) router function. In other words, these solutions have been designed with the edge in mind and are delivering powerful automation with no extra hardware and additional software licenses – supporting the edge with a cost effective solution that also saves space and power.

Edge computing architecture and use cases

Edge computing architecture and use cases