Written by Sandip Kamat, Retail Solutions Product Management at HP and an active member of the LF Edge Outreach Committee

The retail market is going through a major transformation powered by technology. Like any modern business, collecting and acting on relevant data in real time is critical to effective decision making for retailers. Many e-commerce businesses have proven this already and it is time we brought the same level of analytics in brick and mortar stores. Many leading retailers are indeed looking to deploy sensor-based solutions to solve key challenges such as inventory management, workforce optimization, theft detection and promotion effectiveness.

However, the solutions in the market today for these areas are either standalone (focused on 1 or 2 use cases only with their own data silo’s), or they are custom-built (proprietary) making it harder to integrate with other systems deployed in the store. Thus, integrating all the relevant data from these disparate systems remains a distant reality.

A desired solution in this scenario should be something that equips not only the decision makers with real-time insights, but also the IT managers with an ability to customize. This is where having an open framework becomes essential. We at HP believe that the Open framework based retail IoT gateways will help liberate the sensory data streams that are currently trapped in various silos. Bringing these streams together will then help create powerful and actionable insights in real time for the retail vertical and beyond. This is the reason HP joined the board of LF Edge, as well as the Open Retail Initiative (ORI) by Intel. LF edge is building an Open Source framework for the edge and has over 30 major companies working together to make this happen. ORI is a collaborative effort led by Intel and top technology companies who believe that open, accessible solutions will accelerate iteration, flexibility, and innovation at scale.

The retail IoT gateway showcased in a Demo at NRF2020

To address the pain points mentioned above, HP partnered with Intel and a few other companies to showcase a retail IoT gateway. 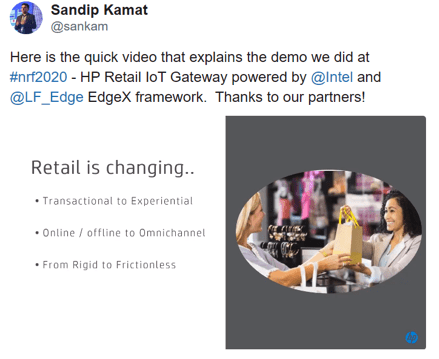 It is powered by an open framework from LF Edge’s EdgeX Foundry and utilizes HP’s MP9 system with an 8th Gen Intel Core Processor. This open-framework cuts time-to-deployment (the demo came together in a matter of weeks) and seamlessly integrates into compatible sensors and cloud engines. In this case, we showcased a theft detection solution at self-checkouts. The gateway seamlessly brought together data streams from camera, barcode scanners, weight scale to flag suspicious events that the store managers then can discreetly monitor those to avoid theft before it happens.

The same gateway would work for other use cases – Depending on the problem statement at hand, different sensors can be integrated into the gateway for completely different metrics. For example, adding an RFID stream could help solve inventory management and in-store tracking.

If you are a retailer, hospitality operator, ISV or a technology enabler company, we would like to hear from you. Let us know if you have a use case that you’d like to work together on.  Collaborate on the EdgeX Vertical Solutions Working Group.  Contribute to the EdgeX Foundry project or influence standards by becoming and LF Edge member and share implementation stories such as these.