Written by Matt Trifiro, Open Glossary of Edge Computing TSC Chair, Co-Chair at State of the Edge and CMO at Vapor IO

State of the Edge 2020, a vendor-neutral report supported by The Linux Foundation’s LF Edge contains unique and in-depth research on edge computing, covering the major trends, drivers and impacts of the technology. The report provides authoritative market forecasting and trend analysis from independent contributors, bringing authoritative research on edge computing to everyone.

Many believe edge computing will be one of the most transformative technologies of the next decade, and that by positioning dense compute, storage and network resources at the edge of the network new classes of applications and services will be enabled which support use cases from life safety to entertainment.

The Linux Foundation’s LF Edge has greatly contributed to the growth of edge computing in the industry, both in terms of technical projects and a deep shared understanding of the concepts and terminology underpinning this new area of technology.

One of the key projects within LF Edge is the Open Glossary of Edge Computing. This project seeks to harmonize the terminology used across the industry when discussing edge computing and has been adopted by a number of projects and contributors in the community. These community members recognize that without a common and accurate definition of key terms and concepts, it is much harder to collaborate on challenges.

State of the Edge is itself an open and collaborative community of organizations and individuals who are passionate about the future of edge computing. The project looks to advance edge computing within the industry through consensus building, ecosystem development and effective communication. To that end, State of the Edge reports are written and published using contributions from a diverse community of writers and analysts. By including many voices, State of the Edge publications avoid the often incomplete, skewed and overly vendor-driven material and research typically available.

Multiple reports have been published to date, and more are planned for release during 2020, including coverage of topics highly relevant to edge computing, such as 5G networks. In addition, the State of the Edge 2020 report contains the latest version of the Open Glossary of Edge Computing, which reached version 2.0 during 2019. 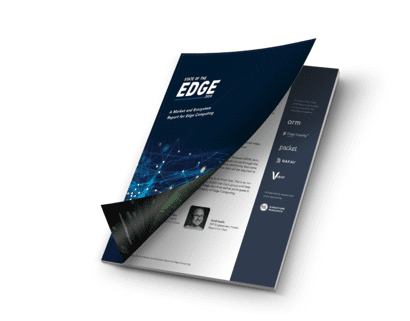 The first State of the Edge report in 2018 focused on establishing a baseline of knowledge from across the edge computing industry. This made it possible for readers to accurately assess what edge computing meant for them, their customers and their unique use cases. This first report covered what were many new and often misunderstood concepts, tying them together in a way that enabled more people than ever before to appreciate and understand the edge.

When it came to the State of the Edge 2020 report, following extensive feedback and surveys, the collaborative team decided that market forecasting on edge computing was hard to come by, and in high demand. Though forecast models on edge computing exist, they are often proprietary and are not built transparently. Moreover, they are typically locked behind expensive paywalls that limit the number of people that can benefit from them.

By drawing on the expertise of professional researchers and well-regarded contributors, State of the Edge has released its first market forecast, along with a comprehensive narrative that discusses the new trends in edge computing.

The State of the Edge is run like an open source project and publishes all of its reports under a Creative Commons license, making it freely available to anyone who is interested. This approach allows the community to benefit from shared knowledge and valuable research on edge computing, without limiting it to those with money to spend.

The State of the Edge 2020 report is available to read now for free. We encourage anyone who is interested in edge computing to give it a read and to send any feedback to State of the Edge.