On October 7th and 8th, I had the pleasure of attending the inaugural EdgeX Open Hackathon in Chicago. EdgeX Foundry is focused on facilitating interoperability between devices and applications, regardless of underlying hardware, OS, and connectivity protocol. The project is ultimately about creating a de-facto standard open API that binds together a preferred mix of open source and commercial value-add.

Once EdgeX hit 1.0 status in June with the Edinburgh release, the community started planning the EdgeX Open Hackathon series for leveraging the framework in customer-valued use cases. 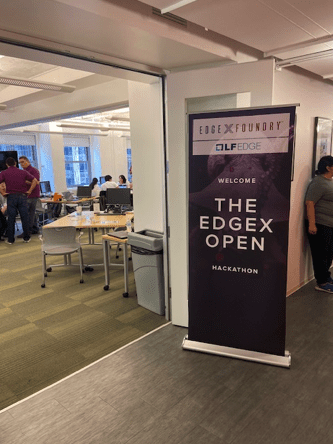 Six teams participated in this inaugural event, representing HAVI, Intel/Intuiface, Johnson Controls, UST Global and Volteo in addition to a small independent team of registered individuals. Pre-work was allowed but a “secret ingredient” (Iron Chef-style) was introduced the day of the event to level the playing field a bit. In this case, it was a camera using Intel’s OpenVINO computer vision and image recognition model to output an object recognition algorithm to an API. Teams were able to earn extra points by integrating this technology into their solution stack.

Read on for how the hackathon went down!

The first day began with pitches from top sponsoring companies Dell, HP and Intel on what EdgeX Foundry means to the IoT market. Nicholas Ahrens of the Retail Industry Leaders Association (RILA) talked about the importance of innovation in retail and then Brad Corrion of Intel walked the teams through the objectives and introduced the secret ingredient. 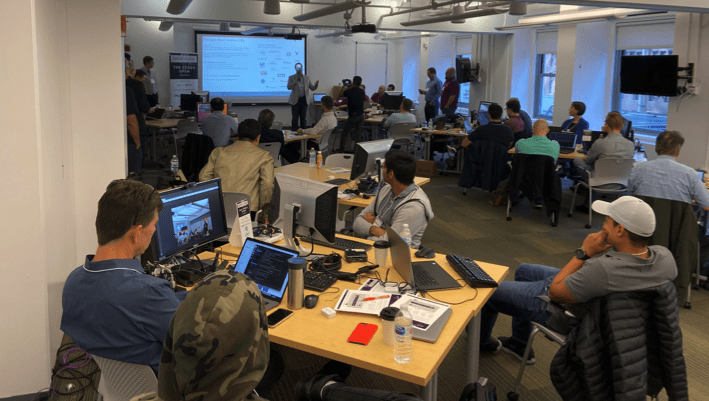 During my pitch, I had the pleasure of announcing that the EdgeX Foundry project recently hit a million total microservice downloads since the April 2017 launch. To get a sense of the accelerating momentum, half of these downloads occurred in the past two months!

With intros completed, the developers got to work. Most of the teams brought a plethora of devices to work with including cameras, sensors, scanners and a thermal printer and many had done some pre-work. Numerous developer attendees had never used EdgeX before and all were able to get the framework running quickly. Once the set-up was completed, they started with their integration of various devices and application stacks to build out their use cases.

Teams diligently working on their solutions

The participants had their choice of one of three use cases, or an open category:

While it appeared that most of the users picked the open category, the reality is that they did variants of the three main use cases. The teams wasted no time getting to work (actually many were working during the intro pitches…) and the room was bustling all day with activity. 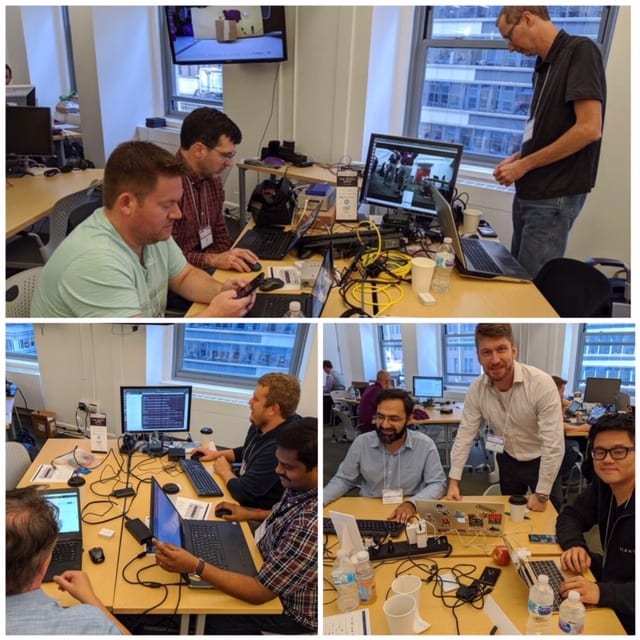 The UST Global team came up with an innovative solution for highly perishable food using Augmented Reality (AR) and RFID to enable grocery store associates to point a smartphone at fresh meat and produce displays to see products that are nearing or beyond the expiration date, i.e. “How fresh is the meat?” This would benefit the grocery store in terms of streamlining how they find, sort and discount expiring food, and benefit the consumer in terms of choosing between either the freshest products or benefiting from dynamic price markdowns or food nearing the expiration date. They came prepared, complete with props including fake chicken nuggets and lamb chops, making me hungry every time I walked by their table.

The UST Global team working on their solution for “How Fresh is the Meat?”

Day one wound down with a whiskey tasting which reminded me of the face-to-face TSC meeting in Edinburgh a year prior where we also ended the first day with a whiskey tasting. I sense a theme here!  Whiskey sommelier Anthony Dina selected three boutique whiskeys from the “edges of the earth” – one from a small batch distiller in the US, one from Scotland and one from New Zealand.

Whiskey from the edges of the earth

We then had some tasty Chicago deep dish pizza, followed by the “EdgeX Open Mic” – a community music jam.  Tony Espy (Canonical) and I worked up a variety of singalongs and managed to get a handful of folks belting out Neil Diamond’s Sweet Caroline and John Denver’s Country Roads, plus he and I did some pretty decent versions of Radiohead’s High and Dry and Jeff Buckley’s “Halleluiah”… especially considering this was only the second time we’ve played together (the first being an open mic night in Edinburgh during the Fall 2018 EdgeX F2F TSC). 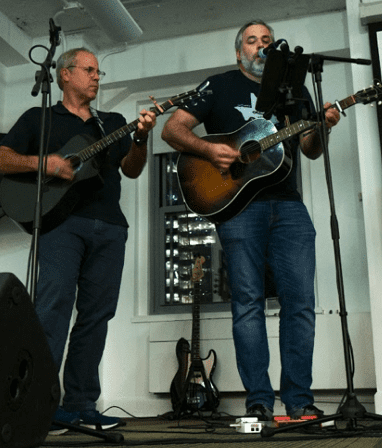 Tony and I belting out the jams

Several folks came up to us afterwards and talked about how they played instruments spanning guitar to saxophone. At the next EdgeX Open, we clearly need to prepare more in advance and get a full band together, or perhaps we should just serve a little more whiskey beforehand! Or, both?

Day two started early with the teams continuing to build out their solutions unified by the EdgeX framework. Around 11am the judges we’re introduced – Eran Harel from AppCard, Nicholas Ahrens from RILA, Juan Santos from Tavistock Group, Mark Stutzman from Area 15, and Scott Gregory from HP. The judges subsequently spent time with each team to learn about their solutions before deliberating.

Each team was then able to formally pitch to the judges and all participants in a final presentation that walked through their solution, what ingredients they used and how EdgeX was used for integration. The judges deliberated a bit more and then we had the closing ceremony, during which the winners were announced… and… drum roll… here they are! 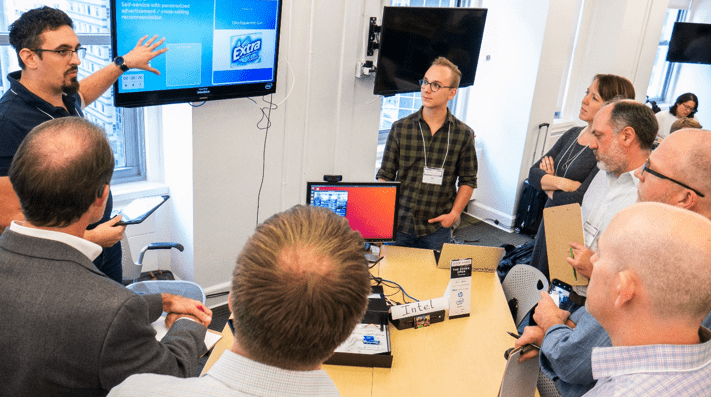 The Intel/Intuiface team meeting with the judges 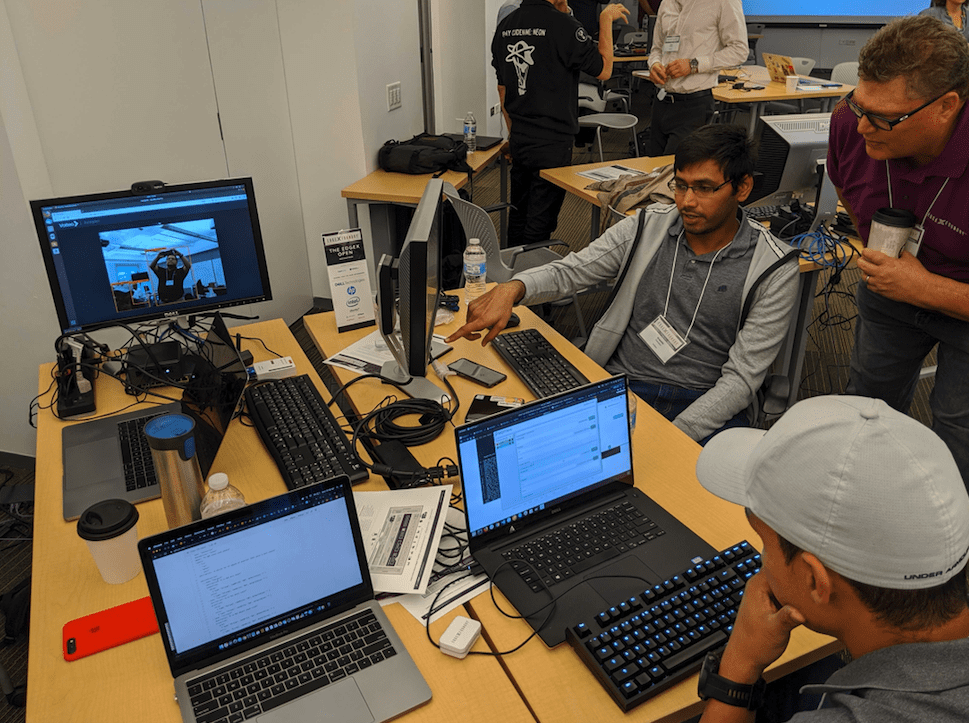 2nd Place – Team Intel/Intuiface: A predictive self-service checkout assistance solution that used RFID and computer vision to trigger an alert when a customer failed to scan items within a reasonable time and/or based on OpenVINO emotion detection during customer interaction with the kiosk. 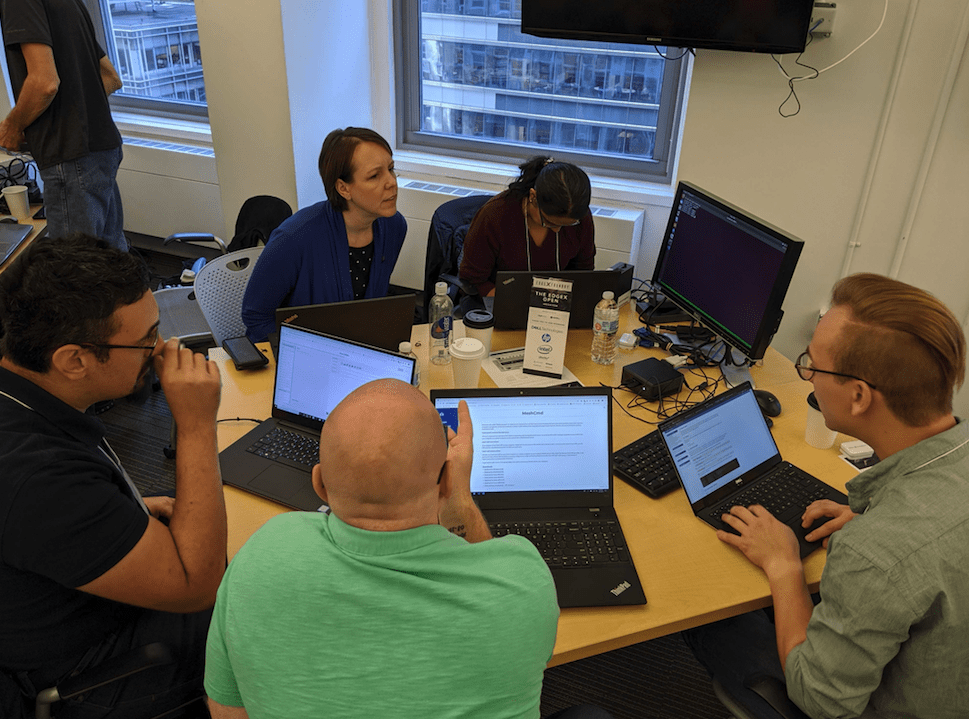 3rd Place – Team UST Global: An AR and RFID-based solution to track ultra-perishable goods in grocery stores and allow for dynamic pricing, e.g. how fresh is the meat? They developed an AR mobile app to scan food aisles and provide details on freshness, current price, etc. 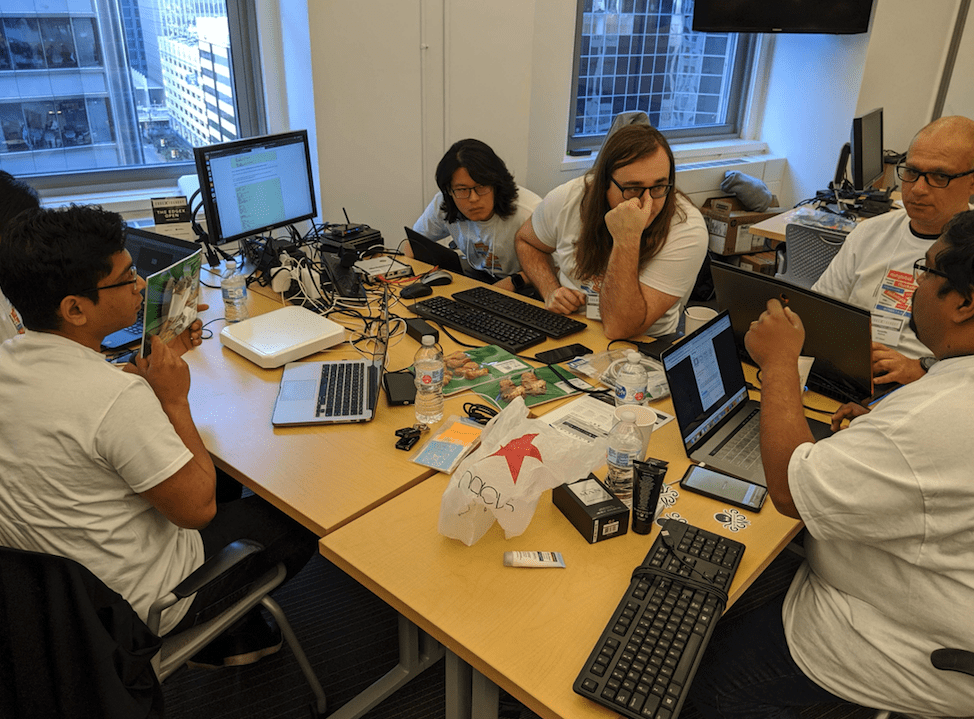 And this wasn’t just for bragging rights – 1st, 2nd and 3rd place winners received $5000, $2500, and $1000 in cash respectively!  As co-founders of the EdgeX Foundry project, Jim White and I had the pleasure of handing out big checks during the award ceremony, summarily checking off a to-do on my bucket list! 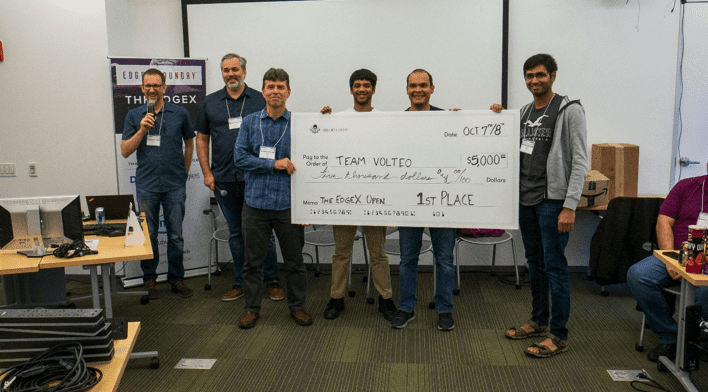 Congrats to Team Volteo for winning the Grand Prize!

Thanks to our sponsors!

It has been an honor for me to participate in the EdgeX community over the years and this event was no exception. Big thanks to the LF Edge and the Retail Industry Leaders Association (RILA) for hosting the event, and to sponsors Canonical, Deep Vision, Dell Technologies, HP, Intel, IoTium and ZEDEDA who also provided their commercial offerings for the developers to use in their solutions as well as tech support on-site. Also, a shout-out to the planning committee which included volunteers from Dell, HP, IBM, Intel and the Linux Foundation. 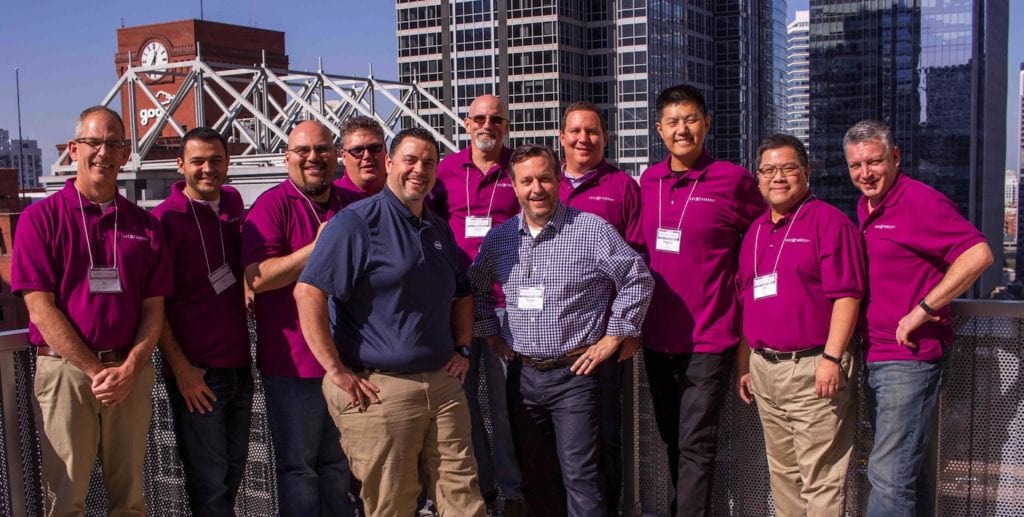 The concept behind the EdgeX Open Hackathon is for it to be a global franchise series. Other markets in discussion for future events include manufacturing, smart cities, oil and gas, utilities/energy, agriculture, healthcare and beyond.

Stay tuned for more detail on the next installment, for which we also plan to include more about the overall LF Edge value prop by pulling from other enabling projects within the umbrella, combined with sponsor content. We’re thinking manufacturing in the Spring 2020 timeframe, likely aligned with an industry event such as Hannover Messe in a nearby town in Europe.

In the meantime, download EdgeX and build something great!