The Open Glossary of Edge Computing began as a utilitarian appendix to the 2018 State of the Edge report. It had humble goals: to cut through the morass of vendor- and pundit-driven definitions around edge computing and, instead, deliver a crisply-defined common lexicon that would enhance understanding and accelerate conversations around all things edge. 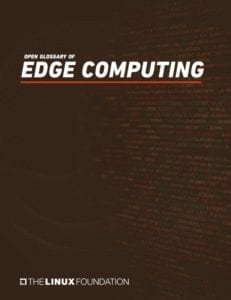 Very quickly, it became clear that the Open Glossary could be a powerful and unifying force in the fledgling world of edge computing and that no one entity should own it. Instead, everybody should own it. Thus began our partnership with The Linux Foundation. We converted the glossary into a GitHub repo, placed it under a Creative Commons license, and created an open source project around it.

In January 2019, the Open Glossary became one of the founding projects of LF Edge, the Linux Foundation’s umbrella group for edge computing projects. The Open Glossary now plays a critical role that spans all of the LF Edge projects with its mission to collaborate around a single point of reference for edge computing terminology. This community-driven lexicon helps mitigate confusing marketing buzzwords by offering a foundation of clear and well-understood words and phrases that can be used by everyone.

In 2019, the momentum of the Open Glossary project will continue unabated. Open Glossary has four main projects this year, building on its successes in 2018:

The Open Glossary project depends on open collaboration, and the community is actively building engagement by seeking out participation from key stakeholder groups in edge computing. Within The Linux Foundation itself, the Open Glossary team has sought input from not only all of the LF Edge projects but also adjacent projects, such as the CNCF’s Kubernetes IoT and Edge working group. In addition, the Open Glossary has formed alliances with other edge computing groups and foundations, including the TIA, iMasons, and the Open19 Foundation. Partnering with other non-profits and consortia will help the project grow its base of passionate collaborators who are dedicated to expanding and improving the Open Glossary.

Readers of the Open Glossary want more than mere definitions; they want to know how the constituent parts fit together as a whole. To answer this request, the Open Glossary has begun the Taxonomy Project, a working group that seeks to create a classification system for edge computing across three core areas:

The Taxonomy Project will draw upon the expertise of subject matter experts in each of the core areas to define and hopefully also visualize the complex relationships between the different components in edge computing. The Taxonomy Project WG is being led by Alex Marcham and the Open Glossary will publish the first taxonomies in Q3 2019.

At the request of The Linux Foundation, the State of the Edge project also contributed its Edge Computing Landscape Map, which is now a working group under the auspices of the Open Glossary. The Landscape WG is being led by Wesley Reisz and has just started out. Currently, they have regular weekly meetings (Tuesdays at noon Pacific Time) and the group is actively working on refining the categories the LF Edge Landscape. The group seeks wider participation and will be asking for help to test and validate the proposed categories.

Edge computing is a rapidly evolving area of development, deployment and discussion, and the Open Glossary contributors aim to keep the glossary up to date with the latest developments in industry and academia, driven by contributions from our project members. During 2019, the Open Glossary team aims to release its 2.0 version of the Open Glossary, which will be a timely update that continues to form the basis for clear and concise communication on the edge.

To see open issues and pull requests or to make contributions, visit the GitHub repo. Go here to join the mailing list.

2019 is shaping up to be a pivotal year for edge technologies, their proponents and of course their end users. The Open Glossary project, as part of The Linux Foundation, is dedicated to continuing its unique mission of bringing a single, open and definitive lingua franca to the world of edge computing. We hope you’ll join us during 2019 as we focus on these goals for the project, and look forward to your contributions.

Contributors can get involved with the Open Glossary project by joining the mailing lists and contributing and commenting on the GitHub repository for the project.

Alex Marcham is a technical marketing manager at Vapor IO. He is one of the primary contributors to the Open Glossary and leads the Taxonomy Project working group. Matt Trifiro is CMO of Vapor IO and is the Chair of the Open Glossary project.