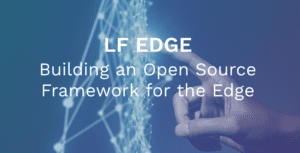 “We are excited to see the LF community continue to collaborate on building unified edge solutions,” said Arpit Joshipura, general manager,  Networking, IoT and Edge Computing, the Linux Foundation. “We appreciate ZEDEDA’s leadership in helping us advance On-Prem Edge IoT with initiatives like Project EVE, and are eager to showcase the broad capabilities of LF Edge onsite in Santa Clara while welcoming our newest members.”

Analysts predict more than 30B connected devices worldwide by 2020, all generating continuous data streams that will need to be processed quickly. Edge computing enables data processing through local gateway systems to reduce latency and provide faster response. With Project EVE, edge gateways and devices run a variety of edge workloads simultaneously, decoupling application management from the underlying hardware. Applications can be deployed in standard virtual machines (VM) or container environments and be managed through a standard set of APIs.

“With Project EVE, the goal is to create a single virtualization standard for edge devices for the industry to build around so that we can enjoy the benefits of cloud-native applications sooner rather than later,” said Said Ouissal, co-founder and CEO of ZEDEDA. “Imagine how much more impact we can achieve now that edge applications can be reliably managed and secured.”

LF Edge is on-site at IoT World in Santa Clara this week, May 13-16. Highlights include live project demonstrations in booth 610 and LF Edge community expert presentations:

“Through its liaison program, IIC works with industry liaison partners to build out the Industrial IoT ecosystem in an effort to accelerate IIoT adoption,” said Wael William Diab, Chair of the IIC Liaison Working Group and Secretary of the IIC Steering Committee. “Open source communities play an important role in the industry ecosystem. The expansion of the scope of liaison collaboration between IIC and LF Edge builds on the successful collaboration and further enables the digital transformation.”

“LF Edge stands as an indispensable bridge between industry and academia. It brings Open Source SD-WAN Frameworks to researchers,” said Peng Liu, Director of Lions Center at The Pennsylvania State University. “We, as security researchers, are eager to learn more, work more and make more contributions. We are currently working on verification of the designs, applicable NIDS solutions, end to end security validation of CI/CD of Akraino. With this precious partnership opportunity, we would like to contribute more to make these projects simple, secure, and scalable SD-WAN solutions.”

“Together, we have a chance to create history by developing the next gen security for connected devices,” said Nupur Mehta, Co-Founder and CEO of OTAinfo. “After revenue, security is the second biggest concern for all IoT companies, and yet there is no clear open source framework widely available. OTAinfo joined LF Edge to provide developers a comprehensive plug and play security framework that eliminates remote update vulnerabilities. We look forward to working with the Edge members and stakeholders in the connected community to revolutionize security on the Edge.”

“There is no denying the value proposition to virtualization and the move to open source partnerships within industry.  By bringing these topics together, and focusing on the network edge, the LF Edge projects are going to enable the next generation of really exciting applications.”  Said Lincoln Lavoie, Senior Engineer, Broadband Technologies at the University of New Hampshire InterOperability Laboratory “The UNH-IOL is thrilled to be participating in those projects, through our work with the Akraino project to develop the Community Lab, helping connect developers with the resources necessary to accelerate their open source efforts.”

About the Linux Foundation

Founded in 2000, the Linux Foundation is supported by more than 1,000 members and is the world’s leading home for collaboration on open source software, open standards, open data, and open hardware. Linux Foundation’s projects are critical to the world’s infrastructure including Linux, Kubernetes, Node.js and more. The Linux Foundation’s methodology focuses on leveraging best practices and addressing the needs of contributors, users and solution providers to create sustainable models for open collaboration. For more information, please visit us at linuxfoundation.org.

Forbes: Opening Up The Edge: Why Agnostic Cloud Software Is The Key To Edge Computing

Forbes: Opening Up The Edge: Why Agnostic Cloud Software Is The Key To Edge Computing